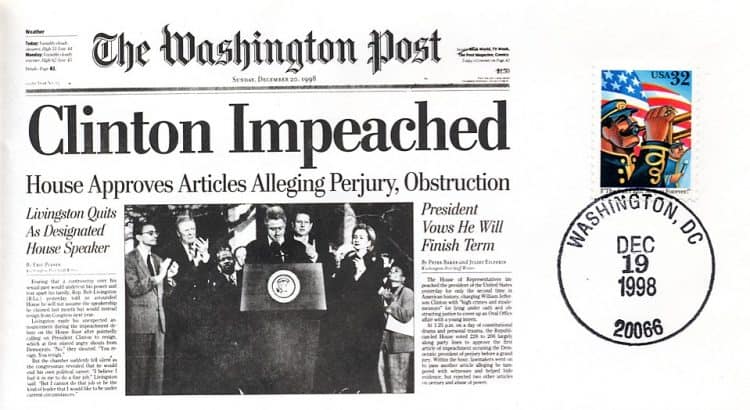 Impeachment does not necessarily mean removal from office; it is only a formal statement of charges, akin to an indictment in criminal law, and is thus only the first step towards removal. Once an individual is impeached, he or she must then face the possibility of conviction via legislative vote, which then entails the removal of the individual from office.

Because impeachment and conviction of officials involves an overturning of the normal Constitutional procedures by which individuals achieve high office (election, ratification, or appointment) and because it generally requires a supermajority, it is usually only reserved for those deemed to have committed serious abuses of their office. In the United States, for example, impeachment at the Federal level is reserved for those who may have committed high crimes and misdemeanors. Several Federal officials, including two Presidents (Andrew Johnson and Bill Clinton, who were both acquitted) and several judges, have been impeached over the course of US history. US President Richard Nixon resigned before Watergate scandal impeachment proceedings could begin.

The federal procedure in the United States involves a vote for impeachment in the House of Representatives on a document known as the Article of Impeachment. Each separate grounds will be a separate Article. House members who support the impeachment then appoint managers who will act like prosecutors in the preparation for the Senate hearing. The hearing for removal is conducted in the Senate and in the case of the impeachment of a President, the Chief Justice of the United States presides over the proceedings (otherwise the Vice-president presides) which are conducted as a trial with witnesses being heard under oath or affirmation. The defendant has the right to legal counsel, the right to cross-examine all witnesses and to testify in his or her defense. The senators must also take an oath or affirmation that they will perform their duties honestly and with due diligence. The hearing cannot be conducted without a 50% plus one quorum. After the hearing the deliberations are held in private. Removal requires a two-thirds majority of the Senate.