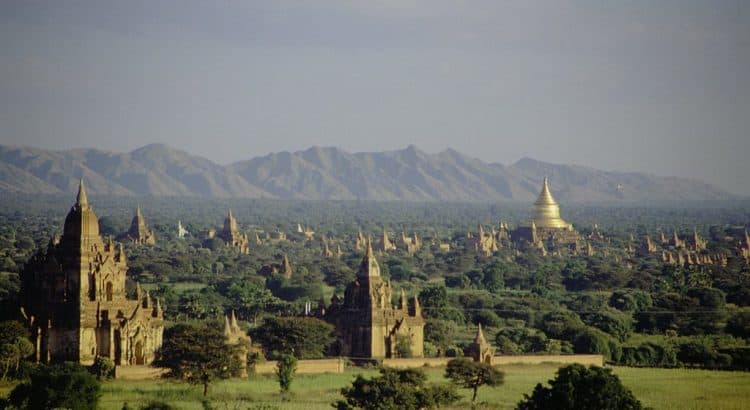 Myanmar is a state in South East Asia

Myanmar, officially the Republic of the Union of Myanmar, also known as Burma, is a sovereign state in South East Asia bordered by Bangladesh, India, China, Laos and Thailand

About one third of Myanmars total perimeter of 5,876 km (3,651 miles), forms an uninterrupted coastline of 1,930 km (1,200 miles) along the Bay of Bengal and the Andaman Sea. The countrys 2014 census revealed a much lower population than expected, with 51 million people recorded. Myanmar is 676,578 square kilometres (261,227 sq mi) in size. Its capital city is Naypyidaw and its largest city and former capital city is Yangon (Rangoon).

Early civilizations in Myanmar included the Tibeto-Burman-speaking Pyu city-states in Upper Burma and the Mon kingdoms in Lower Burma. In the 9th century, the Bamar people entered the upper Irrawaddy valley and, following the establishment of the Pagan Kingdom in the 1050s, the Burmese language, culture and Theravada Buddhism slowly became dominant in the country. The Pagan Kingdom fell due to the Mongol invasions and several warring states emerged. In the 16th century, reunified by the Taungoo Dynasty, the country was for a brief period the largest empire in the history of Mainland Southeast Asia. The early 19th century Konbaung Dynasty ruled over an area that included modern Myanmar and briefly controlled Manipur and Assam as well. The British invaded Myanmar after three Anglo-Burmese Wars in the 19th century and the country became a British colony. Myanmar became an independent nation in 1948, initially as a democratic nation and then, following a coup détat in 1962, a military dictatorship.

For most of its independent years, the country has been engrossed in rampant ethnic strife and Burmas myriad ethnic groups have been involved in one of the worlds longest-running ongoing civil wars. During this time, the United Nations and several other organisations have reported consistent and systematic human rights violations in the country. In 2011, the military junta was officially dissolved following a 2010 general election, and a nominally civilian government was installed. While former military leaders still wield enormous power in the country, the Burmese military have taken steps toward relinquishing control of the government. This, along with the release of Aung San Suu Kyi and political prisoners, has improved the countrys human rights record and foreign relations, and has led to the easing of trade and other economic sanctions. There is, however, continuing criticism of the governments treatment of the Muslim Rohingya minority and its poor response to the religious clashes. In the landmark 2015 election, Aung San Suu Kyis party won a majority in both houses.

Where is Myanmar located?